The reviews on this website are strictly speaking not just for book reviews but resource reviews. The theme of play might suggest all sorts of ‘toys’, but actually the best resources in all the world are natural ones: sticks, sand, insects, mud. We might well add unit blocks, but we probably shouldn’t spend much on resources for children’s play because they are actually all around us to use outdoors or to bring indoors. On the other hand there are shelves and shelves of interesting books from which we may learn about play. We pick up and suggest only a handful and they are not necessarily the most obvious ones.

Tina Bruce is a foremost advocate of play in education. This book represents her mature and refined thought and is clear and beautiful in presentation. The well illustrated and practical material is undergirded by a solid  theoretical basis that will inform all who turn to its pages. An important core is Bruce’s ‘ 12 features of play’ which is worth careful pondering in itself. 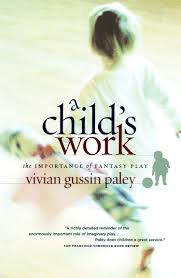 Paley is at her best recording the stories told by children and reflecting on them. In ‘A Child’s Work ‘ she demonstrates so beautifully that when they are ‘just playing’ they are busy working as they plan, negotiate, design and assess. This is the kind of book that inspires us to watch children more carefully and enter into their world. 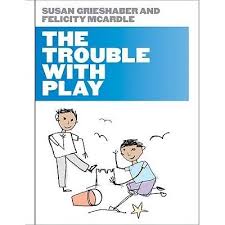 The Trouble with Play

This is a very thought provoking little volume to shake us from a complacent promotion of play. It calls into question all our assumptions about children which may be unrealistically romantic. There are copious references to another heavier book which challenges our optimistic orthodoxy on play: The Ambiguity of Play. Is play really natural? Is play necessarily fun? Is play always innocent and just? Can children’s play really be free? Who makes the rules of play? We are asked to consider the implications for what play should actually look like. 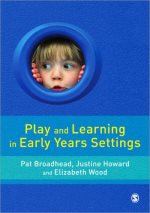 Play and Learning in the Early Years

Here we have a probing and well documented volume with as many authors as its ten chapters. The word ‘play’ has become ambiguous because of the variety of meanings attached to it. Perhaps this is not helped by the introduction of and widespread use of the word playful in the context of early education. Any reader of the book would certainly become clearer about all the issues around play and what are the real benefits of clearly defined play.

It proved a valuable excursion to read a book originating in another, but related, discipline . Winnicott is a psychoanalyst from the Freudian tradition. His work on ‘transitional objects’ which we often call comforters is fascinating. References to the inner and outer life are reminiscent of Froebel. He provokes consideration of a range of topics: comforters themselves, symbolism, relationships and attachments and, of course, play. We may also be prompted to think again about imagination and the nature of religion. This is a book that can be recommended to those caring for babies as well as those working with toddlers, but in fact it concerns the life of humanity which is of interest to us all.

We are treated to a most enjoyable read as Peter Gray impresses on us the benefits of ‘unleashing the instinct to play’. This is a broad ranging discussion of play. Gray observes that the immersion of the young in the hunter-gatherer  culture and its knowledge and skills through free play has been supplanted  by a restrictive and controlling education  programme with  its focus on performance (outcomes ).

Gray writes from an acknowledged and very evident evolutionary perspective. We will want to read with caution. When he traces the transformation of learning through centuries he observes the significance of the rise of agriculture and then the industrial revolution. He speaks of the church’s association with capitalism and the impetus for indoctrination. Christianity might have been cast in a more favourable light had there been reference to the work of John Amos Comenius and the insights of Friedrich Froebel.