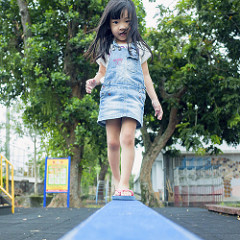 The responses of two-year-olds starting at nursery may be very different. The unfamiliarity of the setting will evoke a wide range of behaviours. Some, being overwhelmed, may simply ‘go into their shell’; some are distressed by the moment of separation from mums; others are attracted by everything in turn as it comes to their attention and they flit from one activity or centre to another.

The toddler, who is the subject of this page, was unable to focus on one thing for any length of time without quickly moving to something else. Our task was to find one thing that would take up her protracted attention and absorb her interest such that we could say that she was really involved.

It was not too difficult: just a matter of observing and then seizing the moment. It was in the block room that our subject alighted upon someone else’s blocks! Once she had been offered some hollow blocks of her own she was in her element. She made a balancing beam. With the support of an adult it was extended and then the fun began. She went round and round in her determined circuit. It was an activity that she had initiated, that was within her ability, and just difficult enough to demand her concentration and be a worthwhile challenge.

After mid-morning snack all the children went outside, our subject included. Then was the opportunity to offer an activity parallel to the one indoors that had so absorbed her attention. The practitioner brought out of store ‘stepping stones’ and arranged them sufficiently close to one another to be an ideal equivalent to the balancing beam.  Predictably the little girl took to it with enthusiasm and applied herself to the new challenge.

Now all this offered the toddler opportunity to develop physical skills, both manipulating large blocks as well as practising balance. It gave practitioners a chance to recognise interests. Most importantly it contributed to settling, focusing and beginning the journey to high levels of involvement.