I first heard about story scribing when I was lucky enough to go on ‘In the moment planning’/ Nursery Year in action’ training at Carterhatch Infants School with Anna Ephgrave and Ruth Moore. It struck me as a really simple way to help children get their stories down on paper, make that link between spoken and written word and encourage creativity. When my children were young, as well as reading bed time stories, we used to make up stories. To begin with I used to make up the stories but before long they were throwing in ideas for me to incorporate. I have continued this in my work with pre-school children and love listening to the stories they makeup. Story scribing seemed to be a lovely way of recording these stories.

My most powerful experience of using story scribing has been with a boy in a nursery last year. This little boy moved to the nursery a couple of terms before starting reception. He had previously been settled in a different nursery where they had no concerns regarding his development or behaviour. For reasons beyond the families control they had moved home to temporary accommodation and the boy had moved nursery. Quite soon after arriving staff started having concerns about his well being and behaviour. The boy seemed to not make friends easily, he appeared not interested in playing or communicating with other children and his behaviour deteriorated to the point that he attacked members of staff and children. The local authority adviser visited and suggested some strategies but staff struggled to implement these effectively. The boy was displaying low levels of wellbeing and involvement; he was regularly trying to escape from the garden, hurting other children, biting, kicking and pulling the hair of staff. One day I was at the nursery and I was fixing the sandpit made from pallets and tarpaulin. I asked this boy if he would like to help me, he said he  would. I explained to him that I was trusting him to use a real hammer and nails and in return he needed to work carefully and safely. He did and for quite some time he helped me hammer the nails in to secure the tarpaulin. 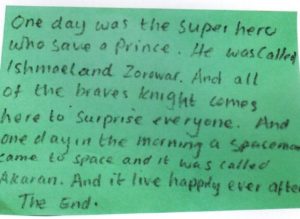 Later that day, trying to build on that positive experience, I sat on the floor near him with a pen and a paper and wondered out loud if I could write a story about what had happened this morning with the hammer and nails. The boy slowly came over and watched me write (I was reading out loud as I wrote ). I wondered if he would like to tell me a story that I could write for him. He said he would and he started to tell me a story about a superhero who saved a prince. What was lovely about this story was the names in it were those of other children in the nursery. I didn’t know he knew the names of the other boys or that he was even interested in them. Clearly I was wrong. We wrote several stories together and at one point I wondered if he would like to have a go at writing any of the letters himself; he said he would. We wrote a story about a boy who went swimming with his mum and flew to the moon. He had a go at writing a couple of the names. His knowledge of letters and sounds was a surprise to me as he had previously shown no interest. Several other children came over and wanted to have a go too.  I spent an hour or so scribing different children’s stories. 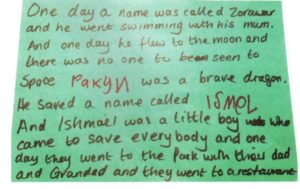 When eventually I got up, I saw the boy outside in the garden with a member of staff writing his own story. They were both so involved and it really made my heart warm to see this little boy engaging with an adult and really enjoying what he was doing. Afterwards the member of staff exclaimed how amazing he was writing, sounding out words, and his knowledge of letter names and how to write them.

This was a really powerful experience for both the child and the adults and it opened my eyes to story scribing being being about so much more than just literacy. It is about imagination, making connections and relationships, being able to succeed at something, ‘writing’ a story even if you can’t write yet, and having your voice heard by others. If you have never tried story scribing I would highly recommend you just grab a pen and paper and have a go!